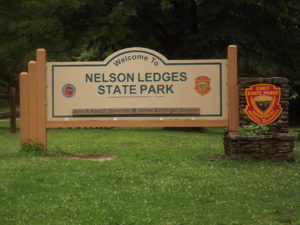 Nelson Kennedy Ledges State Park is a small state park in northeastern Ohio. It covers only 167 acres in Nelson Township (near Garrettsville and Hiram), but provides park goers with a rugged terrain. In addition, several plant species and trees grow here that are uncommon for Ohio. Unique rock formations are common in Nelson Kennedy Ledges, and this is what most people recall from their visits to the park.

Ledges is a perfect addition to the name of this park. In this regard, hikers must be extremely careful while out on the trails. 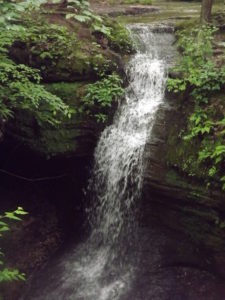 Hiking is the most-widely used recreation at Nelson Kennedy Ledges. Nelson Kennedy Ledges houses a very rugged terrain, especially for an area that is part of the Glaciated Plateau in Ohio. This leads to somewhat treacherous opportunities on hiking trails. Four trails cover the state park, named by different colors (White, Yellow, Red, Blue). The White Trail is easygoing, while the Yellow and Blue are a little more intense. The Red Trail is a difficult half mile for those looking for a challenge. Some rock climbing is involved on the Red Trail. Be sure to visit Minnehaha Falls while at Nelson Ledges (see above picture).

Nelson Kennedy Ledges State Park houses several tree and plant species that are not common elsewhere in the Buckeye State. Moreover, the climate allows for multiple types of trees and plant life that are typically found in more northern areas. Yellow birch and Canadian hemlock trees are two examples of the trees that fall into this category.